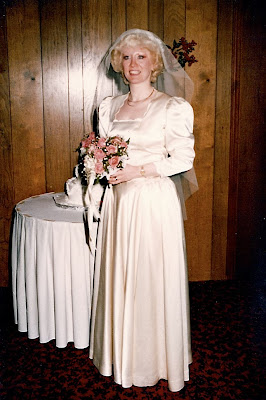 On September 14th at 6:20 AM, Diana, my loving wife and partner of over thirty years, passed away from the effects of the cerebral event she suffered just over two weeks ago. She passed away quietly and comfortably, the easy-listening music she loved playing softly in the background and with me sitting at her side, holding her hand and telling her how much she was loved.

There aren't really words big enough or strong enough to say just how much I Love her and describe the empty space that is now in front of me and will remain, every day, for the remainder of my life. A friend said that he and his wife never mentioned one of us without the other; there was no singularity. We each had our own individuality, our likes, dislikes and differing attitudes, but that is what made us the 'one' that described us as a couple.

Diana was a beautiful and talented woman. She was unbeatable as a salesperson in the fashion industry.   A million dollar producer for Woodward and Lothrop here in the DC area until it closed, she was the person the buyers went to regarding trends, style and salability for merchandise, rather than department management, After that she managed a large beauty salon and literally turned it from a day-to-day operation into one that actually made money. She could spot talent in a young stylist, match them to a client and grow him or her  into a creative force. Since she retired from that business, they have asked repeatedly for her to return.

Diana was born in Manhattan in 1947 and it's rumored that the first word she spoke was "Taxi." She grew up in the Eastern US and never held a driver's license. It wasn't a hinderance because she was organized and determined enough to use whatever transportation was available, including her own shapely legs. After working in the high-end cosmetics business, she worked in the temporary employee recruitment and placement industry - - again becoming a sought-after commodity herself.

When we married and I brought her to England in 1982, the neighbors in our village were convinced they had their own local "Lady Diana." She adapted readily to the divisions of a common language, the differences in culture, and having to prepare dinners in what she referred to as her "Barbie Doll sized" kitchen. She soon was educating the American wives on how and where to shop locally. When we left our village and moved to our second posting in England, the town's butcher cried.


It's hard to imagine why such a tragedy should happen to such a vibrant, talented, respected and loved person. She was always putting others first and her memory for birth-dates, anniversaries and special events was phenomenal. She never forgot to send a card, flowers or organize a night out or a special dinner (prepared by her) for that occasion.


She was always so independent and vital. She always said that she didn't want a life where she was totally dependent on someone else. The results of her injury were such that she would have remained bedridden and probably immobile for the remainder of her days - - and that was contrary to her concept of life and living. We were fortunate that the extent of her disability allowed me to choose a path for her that freed her from the cruel denial of her wishes. She's now free.

I miss you my Love.