How far away from another person can you get? Depends on where you live. How big is your state?

State Size Based On Population Density 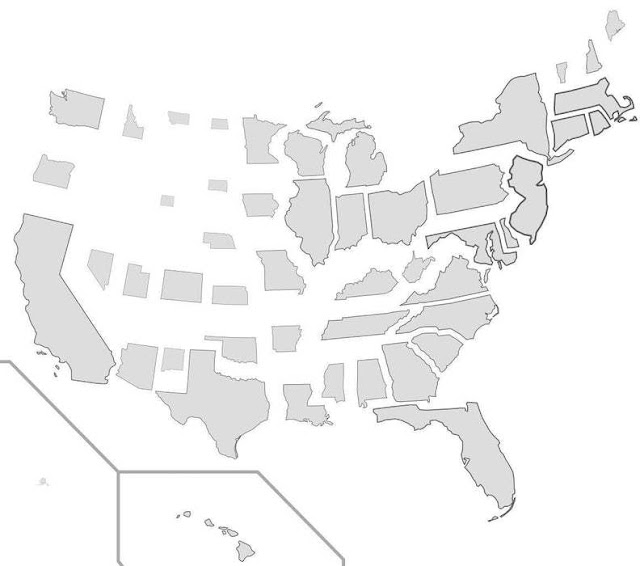 John Reischman and the Jaybirds doing their band standard Saltspring.

Last week was an ancient "trip-tik" Here's another version of a "road" map; only these are Roman:

The Tabula Peutingeriana, an itinerary map, is a reproduction of a Roman map, showing the highways of the Roman world all the way from England to Sri Lanka. It isn’t to scale and manipulates space to show the road system. Pictured are stopping places, prominent towns, and mountain ranges. The Tabula Peutingeriana is also massive at 22 feet in length. At that size, it wouldn’t be useful for a road trip, but with 555 cities and 3,500 place names, it is a chronicle of Rome’s reach. The map’s geographic information dates back to before at least 79 AD, since you can spot Pompeii. The original map has been lost, but we still have a copy thanks to a monk who reproduced it on 11 scrolls in 1265.

Becky Buller's new video The Barber's Fiddle. See if you can spot all the "All-Stars."

When I entered the travel industry I worked for the Auto Club (AAA) as a "Service Counselor." The biggest part of the job was marking maps and producing "Trip-Tiks" for members. The "trip-tik" was a bound series of strip maps showing the towns, services and points of interest along the route. They were assembled and marked by hand (Mapquest, etc had not yet made an appearance). Many folks were amazed to see one for the first time. However, they've been around for a long time. Here's one from 1250: 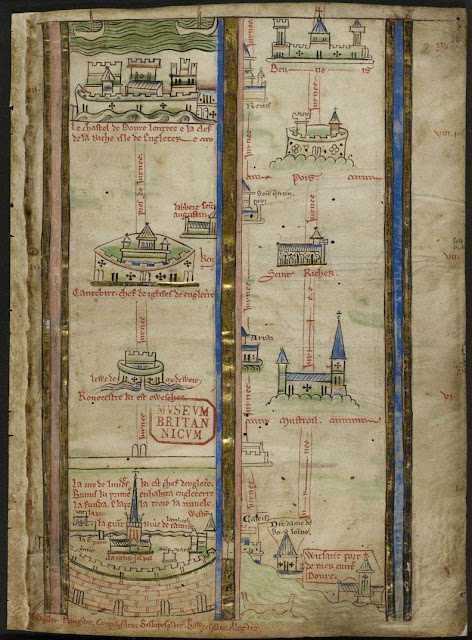 At first glance, this medieval itinerary map by Matthew Paris doesn’t even look like a map. Instead, it’s a line of castles and buildings crossed by red text and blue waves. The map charts a route from London to the Holy Land, highlighting all the sights along the way. The mapmaker included rivers and hills, alternate routes, and places to stop on a religious pilgrimage.  At the bottom left of the map, you can see Matthew Paris’s depiction of London as a thick city wall ringing a blue church.  Like many medieval maps, this one was not intended to be carried on the road. It was an expensive work of art that may have been used for an imagined pilgrimage - one where the pilgrim never had to leave England.

New album and video from Chris Jones and the Nightdrivers, We Needed This Ride.

John Prine passed away yesterday, a victim of the Covid-19 virus.

As mentioned in the NPR obituary linked above, Paradise, the Kentucky hometown of his parents, recalls
his boyhood memories of a place destroyed by the coal-mining industry.

Posted by bearsense at 11:48 AM No comments:

Moe Lane from moelane.com has created this hilarious satirical map which shows the most common cause of death that keeps getting covered up, in each U.S. state. 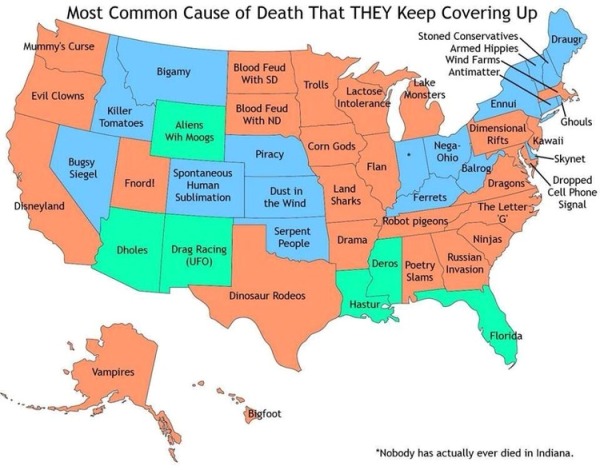 (Sad note subsection -- The late contributing mini-bear JS would have been 70 today .. RIP.)
Posted by bearsense at 12:30 AM No comments:

Well, it appears that the Mango Monster has, again, taken a test for the virus currently ravaging
the country. Like his first try, this one proved negative for the virus but once again proved what he's full of. 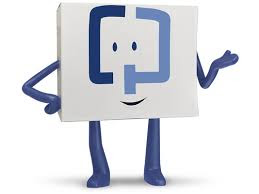 Posted by bearsense at 7:40 PM No comments:

This seems to be happening more often lately. This isn't due to the current malady sweeping the
Nation, but I hold my breath.
Banjo prodigy Jimmy Henley here with Marty Stuart when both were much younger doing the old Bill Monroe standard Rawhide.
RIP Jimmy ..............