The Nine Nations of North America -- 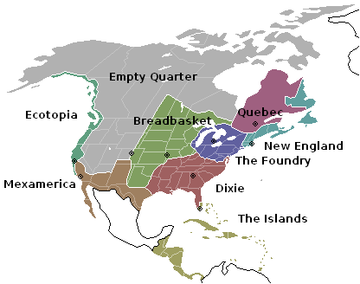 My favorite Carol. No info on the artists ... sorry.

However, here's the Irish Rovers doing the version I post every year !!
I especially enjoy the final stanza.

I post this every Christmas. Can't see any reason not to do it again.
Hope you and your families had a wonderful Christmas.

All the Best from all the min-bears and the proprietier of the Idle Hands Dep't.
Posted by bearsense at 10:30 AM No comments:

The Trinity River Band doing a very nice medley. Hope you have a wonderful Christmas.
.

Thought that since today is the Winter Solstice (well, here at least - at 9:49PM) and it's cold, a venture to somewhere warmer would be nice. Christmas Island ...how appropriate, eh ?

Growing up in Arizona, I continually heard the legend of the Lost Dutchman Gold Mine. I spent hours in the Superstition Mountain Wilderness hiking and climbing ... and yes, speculating on the various landmarks and the probable location of the treasure.
Drove through this area last week while on a visit to see Mom. Ah, the memories.

Here's a copy of the Peralta-Ruth map and its "solution"  Happy hunting.

Well, time to get on with some more songs for the approaching day. Samantha Casey and the Bluegrass Jam from Eastern North Carolina doing Beautiful Star of Bethlehem.

Yeah, Yeah, it's December and you thought that the Plum Pitiful stuff would be gone.

When I started this, I mentioned Ray Davis from WAMU radio. I listened to Ray all the years I lived near the GWTP. Sadly, Ray passed away on December third, last year.
Here's Little Orphan Joe, with Don Reno and Red Smiley's band in the background.

RIP Ray.
Posted by bearsense at 6:30 PM No comments:

Just an observation: mass shootings have become the American equivalent of car bombs in the Middle East.

The part that flummoxes me is that they aren't called terrorist acts. If someone set off a car-bomb, it most certainly be so identified; but guns ?? Nah, just a "mentally deranged, lone wolf (or wolves)" and strangely, mostly committed by young Caucasian males.

Trust me, I know terrorism. I lived with it daily (and was present in Regent's Park on 20 July 1982   and additionally, had to redeploy and reroute a cruise missile convoy due to the Hungerford Massacre in 1987) when I resided in England and was present for the rampage of the "DC Sniper" - which caused so much mind bending terror. I remember being called  by a motorist who was afraid to buy gasoline and asked my advice.

Seems like that "well regulated militia" portion of our Constitution has been ignored by our spineless Congress.

Mr Obama keeps saying that "enough is enough." Trust me, there'll be more until people are so scared and/or fed up that something might be done ..... but, I'm not holding my breath.

Posted by bearsense at 6:42 PM No comments: