Off to Arizona again. This time for a reunion of the Strategic Air Command Airborne Command and Control Association  (SAC ACCA).
Will be good to see some old friends.

A while back, I picked on this group. Here's another look. 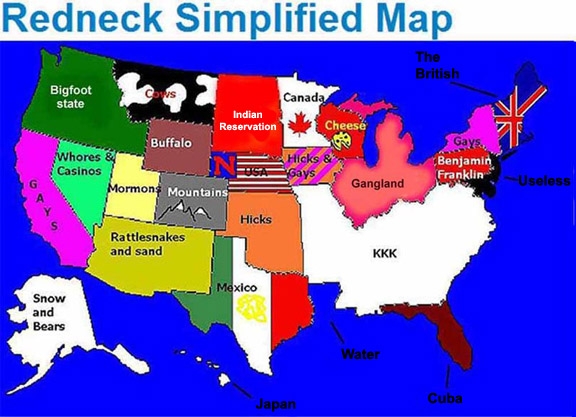 The Earls of Leicester (get it, Earl & Lester ?) doing the old Foggy Mountain Boys' standard
Shuckin' the Corn.

Geography Div (Now that your car has been stolen subsection)

So, your're driving that stolen vehicle. What other laws might you be breaking?? 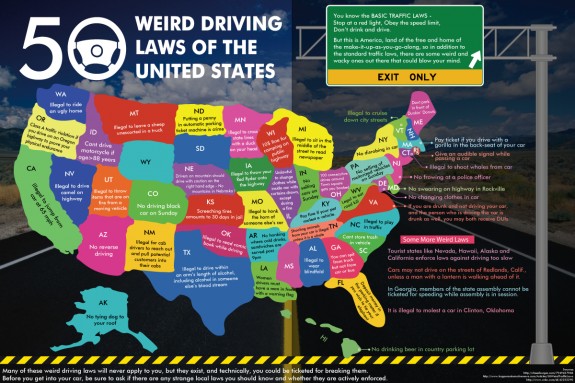 Sort of hard to read, but here's a synopsis:


Alabama – No driving while blindfolded
Alaska – It’s illegal to tie a dog to your car roof
Arizona – It’s against the law to drive a car in reverse on a public road
Arkansas – Don’t honk your car horn anywhere that serves cold drinks or sandwiches after 9 p.m.
California – It’s against the law for women to drive in a housecoat
Colorado – It’s illegal to drive a black car on a Sunday in Denver
Connecticut – A fire engine should not exceed 25 m.p.h. – even on the way to a fire
Delaware – You should not change clothes in your vehicle
Florida – By law, you must feed the parking meter if you tie an elephant, goat or alligator to it
Georgia – It’s illegal to spit from a car or bus, but it’s OK to spit from a truck
Hawaii – It’s against the law for any vehicle in motion to use its hazard lights
Idaho – Anyone over age 88 is forbidden to ride a motorcycle in Idaho Falls
Illinois – It’s illegal to drive a car without a steering wheel
Indiana – It’s against the law to sell cars on Sundays
Iowa – In Mount Vernon, it’s illegal to throw a Red Ryder onto the highway
Kansas – You can’t transport dead poultry in this state
Kentucky – It’s illegal for your pet to molest a vehicle in Fort Thomas
Louisiana – A woman’s husband is required by law to wave a flag in front of her car before she can drive it
Maine – It’s illegal to buy a car on a Sunday
Maryland – It’s a crime to swear from a vehicle in Rockville
Massachusetts – You cannot drive with a gorilla in your backseat
Michigan – It’s against the law to sit in the middle of the street and read a newspaper
Minnesota – You’re a public nuisance if you drive a truck in Minnetonka that leaves mud, dirt or sticky substances on the road
Mississippi – In Oxford, it’s illegal to honk your horn because it might scare nearby horses
Missouri – You can’t honk someone else’s car horn
Montana –  Unless you have a chaperone, it’s illegal to have sheep in your truck
Nebraska – By law, drivers on mountains should drive with caution near the right edge of the highway, even though there are no mountains in Nebraska
Nevada – It’s illegal to ride a camel on the highway
New Hampshire – It’s against the law to inhale bus fumes with the intent of inducing euphoria
New Jersey – Frowning at a police officer is against the law here
New Mexico – It’s illegal for cab drivers to reach out and pull potential customers into their taxis
New York – It’s against the law to disrobe in your car in Sag Harbor
North Carolina – It’s illegal to play in traffic
North Dakota – You’re breaking the law when you put a penny in an automatic parking ticket machine
Ohio – It’s illegal to run out of gas in Youngstown
Oklahoma – It’s illegal to read a comic book while driving
Oregon – By law, you must yield to pedestrians when driving on the sidewalk
Pennsylvania –When driving on a country road at night, you must stop every mile and set off flares or other warning signals and then allow 10 minutes for livestock to clear the road
Rhode Island – It’s illegal to ride a horse on a highway for the purpose of racing or testing the speed of the horse
South Carolina – It’s unlawful to store trash in your vehicle in Hilton Head
South Dakota – You only need to be 14 years old to get your license in South Dakota
Tennessee – It’s illegal to shoot any game other than whales from a moving vehicle
Texas – You must have windshield wipers to register a car, although having a windshield is optional
Utah – By law, birds have the right of way on all highways
Vermont – It’s illegal for cars to backfire in Rutland
Virginia – Women are prohibited from driving a car on Main Street unless her husband is walking in front of the car waving a red flag
Washington – A motorist with criminal intentions must stop at the city limits and telephone the chief of police as he is entering the town
West Virginia ­- It’s legal to eat road kill
Wisconsin – It’s against the law for a person to ride a bicycle with their hands off the handlebars
Wyoming – By law, you must close a gate crossing over a road, river, stream or ditch or you risk a $750 fine

Kinda makes ya just wanna get up and dance, eh ? Fisher's Hornpipe here performed by
Michael Cleveland - fiddle (but you knew that) and Gavin Largent - Dobro
Mi
Posted by bearsense at 6:30 PM No comments:

There's a lot mentioned in the political press these days about the Right - to - Work  and it's implications and impact on employment.

Since today is Labor Day thought this might be appropriate.

Where do you fit in the picture?  And just what can unions do for us ?? 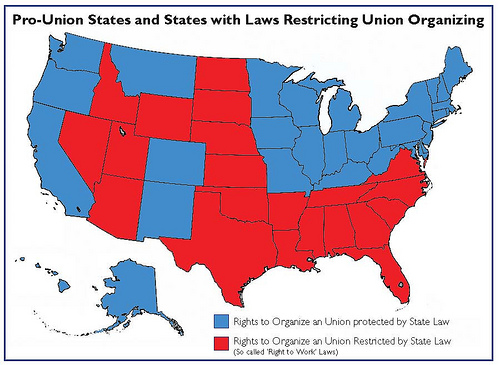