Bobby Osborne doing They Call the Wind Maria, the Lerner and Lowe song from Paint Your Wagon (you just gotta picture Clint Eastwood performing this in the film).

Seems that secession is still alive and well down there in the Confederate Republic of Alabama.
Don't like that integration demanded by Brown vs Board of Education ? Fine, secede from the existing district to ensure yours is pure.  Simple, eh ?? No blah people, no problem,

• I believe all Southern liberals come from the same starting point -- race. Once you figure out they are lying to you about race, you start to question everything.
- -  Molly Ivins

• If you grew up white before the civil rights movement anywhere in the South, all grown-ups lied. They'd tell you stuff like, "Don't drink out of the colored fountain, dear, it's dirty." In the white part of town, the white fountain was always covered with chewing gum and the marks of grubby kids' paws, and the colored fountain was always clean. Children can be horribly logical.     -- Molly Ivins

I heard this song a few weeks ago and loved the words and sentiment. Joe Mullins and the Radio Ramblers doing All Dressed Up.

Special to the Geography Div (Does we know which way to go? subsection)

Seems that when Kim Il Don ordered that "massive armada" (Really big ships and lots of them, really yuge) to go threaten that other Kim in North Korea, the task force left Singapore and immediately sailed south through the Sunda Strait. Go figure. 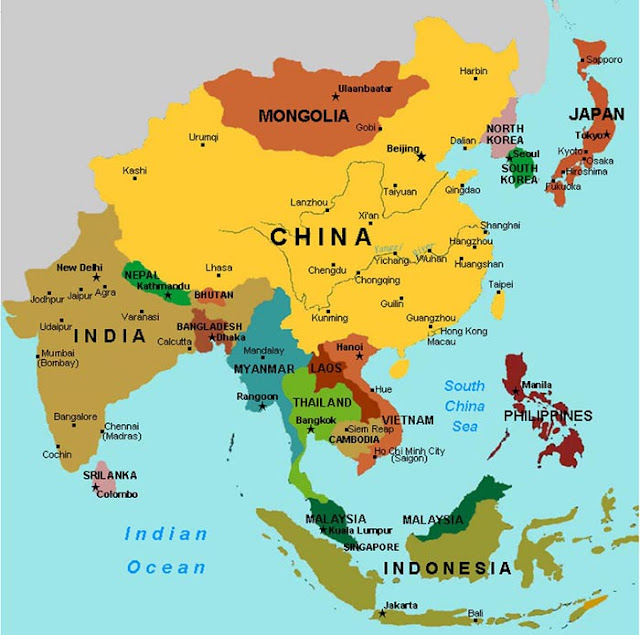 The Sunda Strait is that narrow gap near Jakarta at the bottom of the map. North Korea is at the top.
Maybe the plan is to circumnavigate the globe via the poles (passage will be easy, global warming and all that, eh ?
Posted by bearsense at 6:38 PM No comments:

|
Michael Garland ElliottJuly 21, 1941 - April 6, 2017Michael Garland Elliott passed away peacefully, April 6, 2017, surrounded by people who loved him dearly and cared for him selflessly during the last months of his life. He was born in Charlottesville, Va., in either 1940 or 1941 (he honestly didn't know!), and attended Lane High School, where he shined on the basketball court. After college at University of Virginia, he moved to Long Beach, Calif., where, among other things, he joined a semi-pro basketball team that toured the country playing exhibition games, dressed as women. At such times Mike was called Skaggy Maggie and continued round-ball domination, albeit with a different uniform. Mike was a Porsche enthusiast, owning a dozen of them over the years, but nothing touched his heart like "the ancient game," golf. He was a founding member of The Reserve and spent countless weekends doing what he loved most with like-minded friends. He was very passionate about the game. One time (that we know of) he was angered by an errant shot and threw his club into a tree. Eventually every club in his bag was in that tree. Mike's health had declined over the past decade, and when he was no longer able to golf he accepted it with grace and humor, and threw things at the TV instead. Mike was also the sharpest dresser in town, single-handedly keeping Nike's apparel wing in the black.Though Mike had no family remaining, he stayed close to the people he'd worked with in the plastics industry, especially Danny Velansky and Sean O'Brian, who was by his side at the end. Also present were Larry Smith, Judy Wiley, lovely neighbors Russ, Sandy and Garrett, and his devoted caregivers Alisha Alex, Sara Young and Leslie Kampmann, angels in human form. No patient ever, ever had more loving care.Mike ran out of family long ago and is survived by his ex-wife and best friend, Teresa Elliott. Though their marriage ran aground, their friendship only grew stronger and hers was the last voice Mike heard. And the last thing she said to him was "Donald Trump has been impeached." Upon hearing that he took his final, gentle breath, his earthly work concluded. Mike will be forever missed but never forgotten. A proper memorial is planned for August.Please sign the online guest book at www.oregonlive.com/obits
Published in The Oregonian from Apr. 11 to Apr. 16, 2017

Sign Guest Book
Posted by bearsense at 10:33 AM No comments:

What color is your Mickey (and did you remember to spring forward?).

The Virginia Luthiers doing one of my favorites, Temperance Reel. Drink Up !!

Geography Div (Do you speak Trump?)

Kim Il Don is being lauded as "Presidential" by many in the media for his directed strike on a Syrian airfield.  I'll let Dan Rather speak for me on the subject:


The President of the United States is the Commander in Chief. It is an awesome responsibility. Committing the use of force and American men and women in uniform is about as serious as it gets. But the truly great presidents understand that knowing when NOT to act is as important as knowing when to act.
It is a whole lot easier starting wars than finishing them. And there are many historical examples of where a promise of limited engagement quickly metastasized into something much bigger.
There is a tendency to rally around the flag, and a President who takes on a war footing can see a boost of support. It is often transitory. There are arguments to be made that President Assad in Syria has crossed a line that demands U.S. military interference. Whether this should have been a unilateral action is something we all must consider. Whether President Trump has a plan for what comes next must be debated. Whether there is a coherence to this missile strike fitting into a larger foreign policy strategy is a question that should give us all pause.
The role of the press is to ask hard questions. There is ample evidence that this Administration needs to face deep scrutiny. The lies we have heard, the chaos in governance, and the looming questions about ties with Russia - itself a major player in Syria - demand that the press treat this latest action with healthy skepticism. Perhaps it was the right thing to do. Perhaps a strong and wise policy will emerge. But that judgement is still definitely hanging in the balance.
The number of members of the press who have lauded the actions last night as "presidential" is concerning. War must never be considered a public relations operation. It is not a way for an Administration to gain a narrative. It is a step into a dangerous unknown and its full impact is impossible to predict, especially in the immediate wake of the first strike.

Posted by bearsense at 11:53 AM No comments:

This morning's Los Angeles Times printed the first of four editorials on the "train wreck" called the Trump Presidency.

Part of the article listed what seem to be his good points:

1Trump’s shocking lack of respect for those fundamental rules and institutions on which our government is based. Since Jan. 20, he has repeatedly disparaged and challenged those entities that have threatened his agenda, stoking public distrust of essential institutions in a way that undermines faith in American democracy. He has questioned the qualifications of judges and the integrity of their decisions, rather than acknowledging that even the president must submit to the rule of law. He has clashed with his own intelligence agencies, demeaned government workers and questioned the credibility of the electoral system and the Federal Reserve. He has lashed out at journalists, declaring them “enemies of the people,” rather than defending the importance of a critical, independent free press. His contempt for the rule of law and the norms of government are palpable.
2His utter lack of regard for truth. Whether it is the easily disprovable boasts about the size of his inauguration crowd or his unsubstantiated assertion that Barack Obama bugged Trump Tower, the new president regularly muddies the waters of fact and fiction. It’s difficult to know whether he actually can’t distinguish the real from the unreal — or whether he intentionally conflates the two to befuddle voters, deflect criticism and undermine the very idea of objective truth. Whatever the explanation, he is encouraging Americans to reject facts, to disrespect science, documents, nonpartisanship and the mainstream media — and instead to simply take positions on the basis of ideology and preconceived notions. This is a recipe for a divided country in which differences grow deeper and rational compromise becomes impossible.
3His scary willingness to repeat alt-right conspiracy theories, racist memes and crackpot, out-of-the-mainstream ideas. Again, it is not clear whether he believes them or merely uses them. But to cling to disproven “alternative” facts; to retweet racists; to make unverifiable or false statements about rigged elections and fraudulent voters; to buy into discredited conspiracy theories first floated on fringe websites and in supermarket tabloids — these are all of a piece with the Barack Obama birther claptrap that Trump was peddling years ago and which brought him to political prominence. It is deeply alarming that a president would lend the credibility of his office to ideas that have been rightly rejected by politicians from both major political parties.

The highlighted link contains the links to the other three parts (today, tomorrow and Wednesday. Enjoy ....
Posted by bearsense at 9:27 AM No comments:

APRIL FOOL not DIV (YA CAN'T MAKE THIS SHIT UP SUBSECTION)

You just gotta be shittin' me.

Posted by bearsense at 5:40 PM No comments: