Hopefully, the scheduler will post this  - -  I'm Paddling on the Eastern Shore

No offense to Don and Phil, but thus is probably the best version of the song that has ever been done
Kenny Edwards' bass is just fantastic.

Posted by bearsense at 10:04 PM No comments:

Email ThisBlogThis!Share to TwitterShare to FacebookShare to Pinterest
Labels: Music

Just maybe this really is the guy we need to solve our problems. Right, just open a window.

Romney said. “When you have a fire in an aircraft, there’s no place to go, exactly, there’s no — and you can’t find any oxygen from outside the aircraft to get in the aircraft, because the windows don’t open. I don’t know why they don’t do that. It’s a real problem."

I really think he should try it out himself.

Other options might be; a) invest in a company developing this concept; or b) blame the
Ni (CLANG!!).

Over the past week several people have called attention to the differences faced in the upcoming election.

Much of this has been spurred by Willard's "inelegant" dismissal of 47% of the population and 'lil Buddy's tepid support by calling him "inarticulate." I'd simply label the ticket as inadequate.

Badtux commented on voting, Jim Wright on the treatment of veterans, Paul Krugman on the concept of what constitutes work. All illustrate the differences between Democrats and today's Republican parties.

To sum it up: Dems want people to vote, Repubs want to limit the franchise. The Dems idea of "Supporting the Troops" is pay, benefits and help. The Repubs, spend money on the industry and keep the troops engaged. Dems support people who make "things."' Repubs believe in people that "make deals." Democrats are tolerant of other's beliefs. Republicans tolerate only their own.Democrats believe the future will be better. Republicans long for the past. Democrats believe that government is there to help and protect people. Republicans believe that government is unnecessary. I guess the late Molly Ivins said it best:

We have a really important choice coming up in November. I know which way I'm paddling.

One of the great bluegrass mandolin pieces  - -  by the guy what composed it !


Well, Well .... looks like the business of population control has certainly taken a turn for the better down there in Texas. Suddenly, the state has about 80,000 fewer adult residents (and those are just the registered voters). If they do an accurate count we may learn that no one really lives there. I wonder if their Congressional delegation should be cut by one congresscritter ????

Registrars are sending out letters to the newly deceased and telling them to reply if it ain't so. I'm sure they are rising from the graves pleading for "BRAINS" and hoping they have enough spit left to lick a stamp. Perhaps the plaintive cries are a plea for their elected representatives and officials to acquire some ...... but since so many are Republicans ................

If they really aren't dead (maybe only pretending, eh ??) then they can still show up to vote. But if they're dead, and their name has been purged, how will they get past the poll guardians ?? Hint: if you're a Republican, then  ..... "HOSANNA IN THE HIGHEST ... a friggin' miracle, he's alive."

Posted by bearsense at 10:03 AM No comments:

After a great weekend of kayaking and camping: 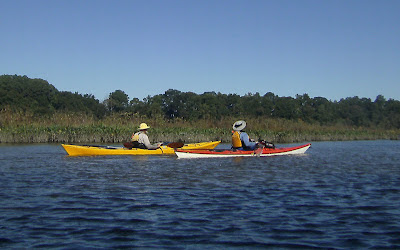 I return to the "real world" and see the news and the newspaper - -  and find that nothing has really changed.

Willard still can't seem to get anything right (except for his audience) and still ain't tellin'  us anything beyond "Trust Me and my lil' Buddy."

Lil' Buddy tells the folks at the valuable voters summit that he can't really say what the plans are, but can pretty well be summed up as, "Your money and my experience will soon become my money and your experience."**

Little Ricky tells the valuable voters that the Grand Ole Party will never win over the "smart" people (as if there was ever any doubt. I'd love tto go on, but Jim Wright at Stonekettle Station already brilliantly covered the subject.

Faux news keeps right on tryin' to convince us that most folks really don't care for that Kenyan, Muslim, Socialist, America hating person in the White House ( why don't they call him Mr. President?). Ah well,  a pretty face can only do so much. Perhaps she should have interviewed Clint's chair, eh ??

** stolen from Carsten Stroud's  Niceville
Posted by bearsense at 12:10 PM No comments:

On this date in 1948, Rollie Free donned his swimming trunks and goggles and proceeded to set the US motorcycle land speed record on a production Vincent Black Lightning motorcycle.

English musician Richard Thompson wrote this in 1991. There's at least a great shortstory, if not an entire novel, in the song. It's been covered by several persons, but this is my favorite  - - and Jason Carter's fiddle licks are outstanding.  Fellow blogger Badtux posted the Thompson version back in July, so link to him if you want to make a comparison.

This was recorded at the Ryman Auditorium in Nashville and has the best quality (feel free to exit before the gospel number  - -  though the McCory band has excellent harmony).
I read a comment about Del being asked to perform this at Newport a few years back. He told the requester no and said to wait 'til later in the show and hear the best version -  performed by the fellow who wrote it.
Classy.

Posted by bearsense at 12:00 AM No comments:

Zombies of the Culture Wars .... div


They're Back !!!!!
Tomorrow is September 11; a pretty horrible thing happened on a wonderful fall morning (and tomorrow's weather here near the GWTP promises to be exactly the same).
My in-box is beginning to overflow with the crank missives about the "sign on the store door in a Houston mall."  - -  I'm sure you've gotten at least one - if not two or three. For those without any friends or relatives on the far-right (or the simply excitable) here it is: 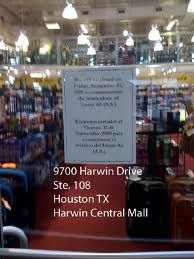 The verbiage attached in the e-mail goes on to make other claims.
Here's the SNOPES cite  and my previous post on "Calendrical Dysfunction"
As I've said before, it does no use to argue. They'll be hauling this one out of the crazy-bag every year.
The memory of the folks that died in the Towers and the Pentagon deserves better.
Posted by bearsense at 8:36 AM No comments:

Used to be that all the stores were closed today. Working folks (except for those involved in public safety or the swimming pools) had the day off. School hadn't started and the political campaigns didn't begin 'til tomorrow.
Now, it's just another excuse to shop while the politicos pay lip service to those ungrateful slugs that are told they're lucky to have a job (and probably won't be getting a paid day off).
What's next "Capital Day"???  -- stay tuned

Posted by bearsense at 5:00 AM No comments:

Email ThisBlogThis!Share to TwitterShare to FacebookShare to Pinterest
Labels: Music

The local communist/socialist/bleeding heart PBS station here near the Great White Theme Park is re-broadcasting I, Claudius. one of the best dramatic series ever broadcast. At least Livia lets "those who are about to die" know what she really thinks of them.
I think that Digby summed it up better than I could have, but couldn't Mitt nave even made passing reference to the troops in harm's way ????? I guess that would have come too closr to calling out the name of the person who started all this, eh ???
It reminds me of the Jonathan Winter's Marine Corps' bit where the LT tells the troops how bloody the landing is going to be and saying, "I'd hoped to go with you, but they need me here."

Posted by bearsense at 7:40 PM No comments:

Since Bill didn't make it for yesterday's astronomical event, here's one of my favorites. It's a tribute to the man that taught Bill Monroe to play and influenced his career.