Three weeks in and you might be getting mad, eh ?? 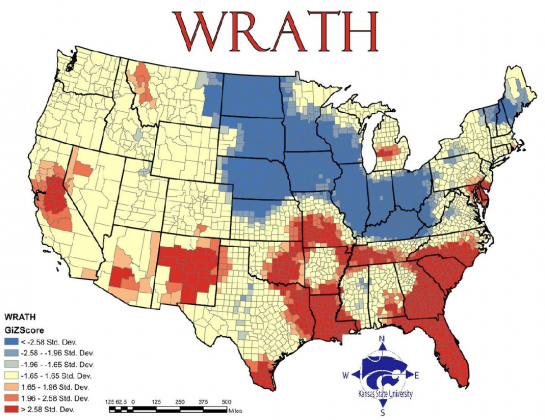 Wrath was calculated by comparing the total number of violent crimes — murder, assault and rape — reported to the FBI per capita.
Posted by bearsense at 10:30 PM No comments:

One of the harder things about living in a townehouse is that you can't always get from front to back easily.
Unloaded the kayak from the car this morning and put it on the cart for the hike around the units and through to woods to my back deck. As I was removing the bungees from the cart, I was attacked by a swarm of these: 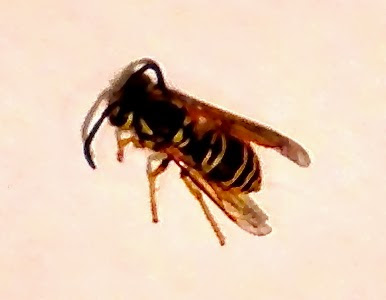 Was stung four times - hand, arm, ankle and thigh before I escaped into the house. Two of the little bastards followed me in and met with a violent end ! Found a couple of Benedryl and swallowed them. No respiratory problems but the "bite sites" sure sting !!!

Guess I'll have to "armor up" and scout the woods for the nesting site.

Here's this week's installment; if you're sorry or mad you didn't think of it,  don't blame the Bear: 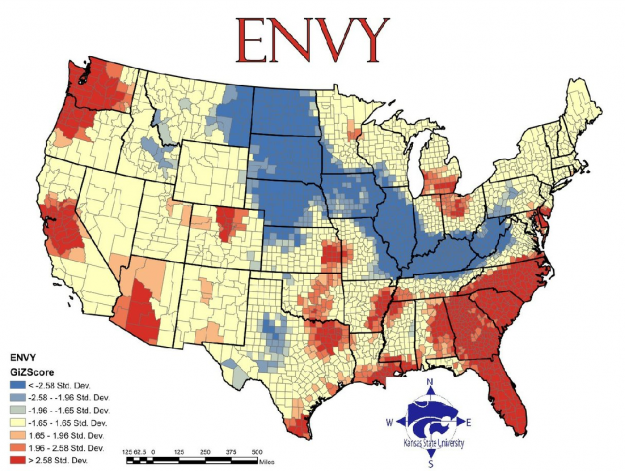 Envy was calculated using the total number of thefts — robbery, burglary, larceny and stolen cars.
Posted by bearsense at 10:30 PM No comments:

Rhonda Vincent and The Rage with a little something for everyone:

It always amazes me how the misuse of one word can wreck (and sometimes add a bit of humor to) an entire news story. One can't help but wonder if it's an inadvertent misuse or a lack of knowledge.
Consider this a piece (front page center, above the fold) from this morning's WaPo. Did you catch it ??

"It is unclear exactly how British intelligence services linked the Pakistani e-mail address,sana_pakhtana@yahoo.com, to a senior al-Qaeda operative who communicated in a kind of pigeon code to his distant allies." (Italics mine)

I'm sure reporters Finn and Miller weren't implying that the Brits used a shotgun, nets, arrows, highly trained pussycats or a guy passing out poisoned popcorn in Trafalgar Square (the meta-piegon method) to capture, disable, destroy or otherwise intercept the unfortunate avian courier helping out the terrorists. Seems like those clever terrorists were already attempting to circumvent the possibility of electronic eavesdropping by reverting to time-honored methods of communication. The images brought to mind are numerous ...... and the remainder of the story irrelevant.

Here's what we're dealing with:  A homophone is a word that has the same sound as another word but is spelled differently and has a different meaning.

I think what the writers were trying to get convey was the use of a "pidgin code" as in:

Years ago, I scored writing samples from high schoolers. Believe me I've seen some pretty humorous and egregious butchery of the English language. I once saw the words "to,"too," and "two" used incorrectly in the same sentence.
Here's hoping the WaPo style manual doesn't cover this one.

** 'When I use a word,' Humpty Dumpty said, in rather a scornful tone, 'it means just what I choose it to mean — neither more nor less.' Lewis Carroll - "Through the Looking Glass

Posted by bearsense at 9:14 AM No comments:

Starting off a series for the summer (well, seven weeks of it anyway).
We'll start off with one of everyone's favorites: 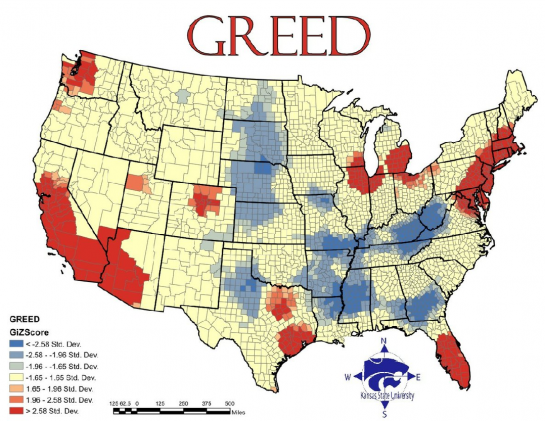 Greed was calculated by comparing average incomes with the total number of inhabitants living beneath the poverty line.
Posted by bearsense at 10:30 PM 1 comment:

Working for a Livin' Div (learnin' how subsection)

Well, a court has finally ruled that unpaid "internships" are probably illegal. They didn't mention the fact that they're immoral and probably worthless.
This morning's WaPo had the news on the court's ruling (it will probably be appealed so the Supremes will get a shot at it -- we know how that will probably turn out, eh ?)
I did find this snippet interesting:

"Depending on how you look at it, this is either massive exploitation of young people by powerful corporations which worsens inequality, or a valuable opportunity for on-the-job training at lower cost than a degree or certificate at a college or university."

I fall into the "exploitation" camp.
Thing is, we used to have a system that took care of this "training" thingee. It was part of the Labor movement and was called "apprenticeships"  - -  there are still a few around, but not like in the past.
Companies also trained their employees; both initially and on an on-going basis.
Now, in the interest of "shareholder equity," after employees are cut, training is usually the next expense to go. (I guess fewer, less trained employees really increase the prospects of a company, but I'm just an old, retired Bear).

Posted by bearsense at 9:34 AM No comments:

Everyone who lives there knows it's the centre of the universe, but how do they see themselves ?? 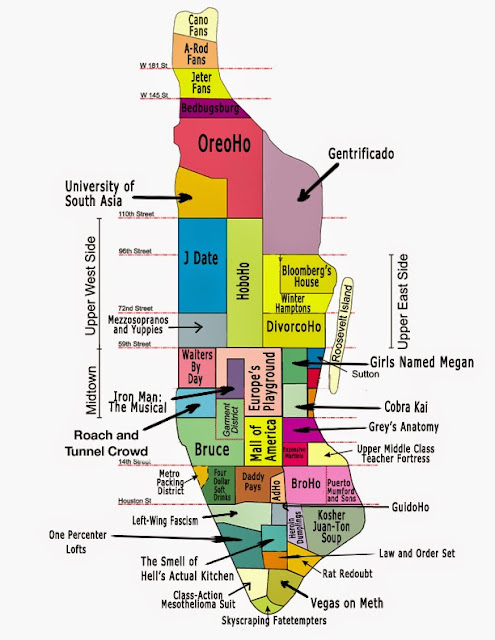 Nice instrumental by Sierra Hull and her band, Highway 111. Hopefully, I've gotten the musicians correct. She seems to go through band members faster than fresh strings. Unfortunately the "Band" tab on her blog features only a picture of the young lady herself (couldn't find a bandmember's name on the entire site).

Here's a state we haven't picked on yet ........ besides, everyone picks on West Virginia. 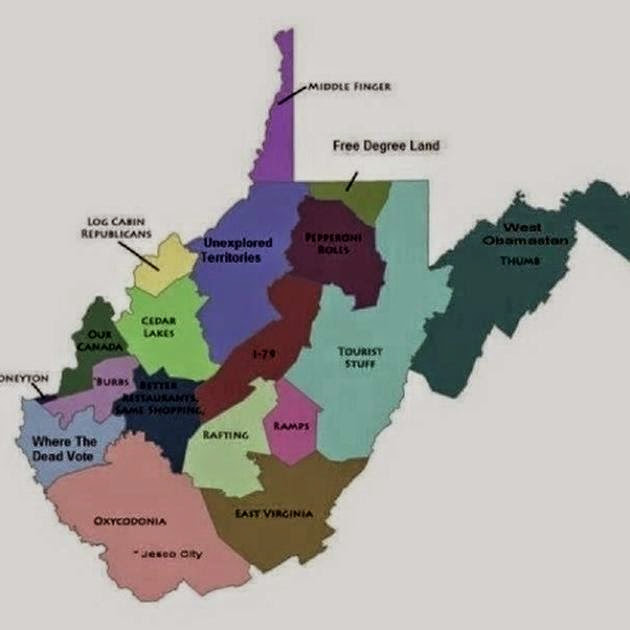 
Excellent mandolin, guitar and banjo interaction on Aquatic Hitchhiker  by Leftover Salmon  - a group thats been around (with many changes) since 1989.