This one is personal and pretty difficult to compose right now  - - I guess if you stagger through it, you'll understand. 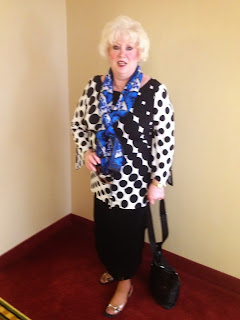 (She ain't too shabby for someone on Social Security, eh??)
[and yes, the blonde hair is real]


I've known the woman that is my wife, my companion, my partner and my lover for almost sixty years. We've been married over thirty (as she says, I finally came to my senses). She's the one that started calling me "the Bear" and it's stuck.
She's put up with crap for half of my career as an Air Force officer - -  the separations, the frustrations, the long hours and the politics. She could cook a gourmet meal for two or feed a crowd of fifty (and love doing it). She was there after my retirement; encouraging me when the "Bush the First" economy was cratering and I couldn't find a job. When I was finally recruited for a job in the DC area she saluted and marched into the uncertainty with me; and when the job was canceled, she promptly went out and got one herself.
When I was diagnosed with cancer, she never wavered in her positive support and in looking after my every need even on the two occasions when she was afraid I wasn't coming home again.

Wednesday morning, after taking a shower, she collapsed on our bed complaining of a monster headache. Within five minutes she was incoherent. The paramedics arrived three minutes later and she was taken to our local hospital and then transported, in a coma, to Johns Hopkins in Baltimore and their Neurological Critical Care Unit.
During the ensuing forty-eight hours (less actually) she's undergone three surgical procedures, an angiogram and two CAT scans. My state of shock is nothing compared to what she's been through so far; and I can't possibly compare my five surgeries to her present condition. At least when I came out of anesthesia, I knew she was there - so far, I don't know if she knows.

Apparently, she was a victim of a brain AVM (arteriovenous malformation) a very rare, congenital condition that usually cannot be diagnosed ahead of time. The rupture caused massive bleeding within and around her brain. A drain was placed for removing the fluid and, later that evening, a portion of her skull (in back) was removed to allow the brain to swell and relieve the pressure. A CAT scan has also revealed four separate aneurysms in the arteries leading to the malformation. These have now been "blocked" (with, probably, some resultant "stroke" ramifications). The hardest part of all this is the "not knowing." Hell, even the Docs don't know (and that isn't their fault). They tell me that, so far, the results are positive, everything has done what it was intended to do and the next five days or so should give us a better idea of what's to follow.

This morning, she squeezed the nurse's hand and gave a "thumbs up" when asked (well, shouted at anyway - she's still unconscious and on a ventilator). I hold her hand and talk to her and hope she can hear me and know I'm there and that I Love her so very much. She did (I think) give me a little squeeze tonite.

Years ago (about the same time I became the Bear) I nick-named her "the Goose Girl" because of her fondness for the down comforter on the bed. I've asked the nurses to call her by that name since it's a name she reflexively associates with love and companionship. Anything I can do to bring her back from whatever  place she is I'll do ......... I simply don't know where she is right now. I also often don't even know what questions to ask ..... consider the old analogy "like a hog lookin' at a pocket-watch."

There are some things I can be thankful for: I was home and not out Driving4$$. That I had the sense not to panic and call for help. That response was quick. That Johns Hopkins is probably the finest hospital in the country. That we have insurance ( I guess that's what "delayed gratification" is all about).

Anyone who has been through anything like this will associate with what I've said. If you haven't, I hope you never do. Love the people close to you. Don't leave on an unkind word and hold dear your every moment together. The Goose Girl and I were talking intelligently and coherently fifteen minutes before the paramedics were called, it doesn't take long ..... or much ........ or whatever ..........

I guess it's now my turn to give back whatever it takes and only hope that she comes back to me. But, I'm ready. And then again, that's what love's all about, eh ?

P.S.  The SaturdayBluegrass is scheduled already.