Whatever was he thinking Division (2nd Amendment subsection)

You really have to question the reasoning of some folks - -  those who own guns (and, yes, I do) and those who allow others to own them. 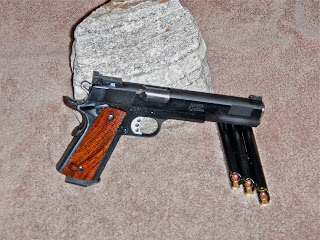 Tuesday, down in the GWTP they arrested another one.
Apparently, he was good to his word as he was "confronted" and arrested without shots being fired. No mention was made of what direction he was going to fire, but several targets of opportunity west of the White House readily come to mind  - including the headquarters of the American Red Cross and the Corcoran Gallery, but I don't think he was considering anything on the west side of 17th St. It's been wicked hot and humid here, maybe the weather's to blame.

Then, there's this guy. Originally, he wanted to organize a "peaceful march" (I kinda thought of it as an armed mob) across the Memorial Bridge from Arlington Cemetery into DC on July 4th. Just a benign expression of that Second Amendment all hold so dear.
Instead, he brings a shotgun downtown and videos himself loading it. Talk about self-incrimination.

A couple of years ago, someone attempted to organize an armed rally in Virginia. I wonder what would have happened if legal gun owners of a darker hue had shown up to participate ??

The news and the inner tubes are all awash with opinions (again) on what constitutes "responsible" gun ownership. I'm not going to opine on the subject except to say that once someone has demonstrated that  he or she isn't responsible, then the "well regulated" part of the Second Amendment takes precedence.

Posted by bearsense at 9:56 AM