Today in 1916, these here United States were invaded by Mexico!!! Guess we needed that unnecessary wall then too, eh ? 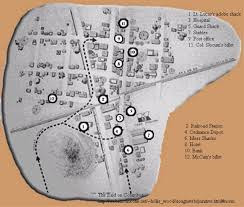 In the small hours of March 9th 1916 Villa crossed the Mexican/ U.S.A border 3 miles West of the border gate at Palomas (manned by 151 men and 7 officers of the 13th Cavalry).The town, garrisoned with 341 men and 7 officers, lay quiet until around 4.30am when Villa's men rode in from the west, dividing their force to attack the town itself and the military camp.Half the Villistas penetrated as far as the Commercial Hotel, halfway up Main Street where they robbed and butchered 9 guests. The other half struck Camp Furlong from the Southeast targeting the stables in order to spook away as many of the horses as possible. The cook wide awake and at work defended themselves with foraging shotguns as point blank range. Meanwhile at the cross roads of main street and the railroad the Machinegun Company had set themselves up and would discharge 20,000 rounds of ammunition. Eventually the raiders withdrew from the town and were hotly pursued by Captain Tompkins, 56 cavalrymen verses 400 Villistas. Tompkins drove Villa 15 miles back into Mexico killing 32. Tompkins returned to Columbus at around 1pm to the sight of 67 dead Villistas being doused with kerosene and set ablaze.The Subsequent Mexican Punitive Expedition lead by General John J. Pershing lasted some 10 months but it failed to capture Villa. It did however disperse his forces who never again penetrated American soil.
(H/T Treasurenet)
Posted by bearsense at 12:30 AM